“Can you see sound?” was the question asked by artist David Littler to pupils from Kettering’s Isebrook SEN Cognition and Learning College during a 2014 workshop at our cottages in the woods. The answer would also go some way to explaining why as a visual arts organisation we frequently work with those elusively defined creators that we call Sound Artists.

David first encouraged pupils to see sound by closing their eyes and listening to the noises emanating from the forest and surrounding meadow. Imaginations began to see birds tweeting, insects buzzing, foxes frolicking and the sound of a distant aeroplane.

Pupils began to draw these sounds, both literally and abstractly, on a piece of paper the length of two picnic tables as they sat outdoors. The wind in the leaves of the trees might be represented by swirling lines; the fictional foxes by goggly eyes or bright patches of orange.

After pupils punched small holes in the key parts of their collective drawing, David helped to feed the paper through his music box. The sounds they could see became the sights they could hear.

This revelation was tested further by watching the shapes made on sound visualisers and oscilloscopes, generated by objects from David’s box of tricks. The noise of a balloon exhaling rapidly looked as amusing as it sounds. A hydrophone meeting an effervescent tablet in a jug of water as peculiar as you might imagine.

After lunch, pupils experimented with Trope and Bloom, Brian Eno’s Generative Music apps, where they created elaborate patterns and unique melodies by touching an iPad. Projected onto the walls of the cottages amplified shapes and sounds created an immersive environment for the whole class.

At this point the call of the sounds emanating from the woods, both factual and fictional, became too loud to resist. Armed with headphones and microphones, pupils set off to investigate, returning with a plethora of field recordings and gathered objects.

Examining the objects under a microscope, the resulting images were turned into sounds through further generative software. How does the microscopic image of a blade of grass sound compared to the field recording of the grassy meadow? Remarkably like freeform jazz. What does a stone sound like? Rock music of course. The pupils promptly put the remaining stones to their ears to listen more closely to the sounds from within.

So can you see sound? We’re used to art requiring some suspension of disbelief. But in the realm of imagination things are always true. Thanks to David’s workshop these pupils were able to listen to their imagination and that was wonderful to see. 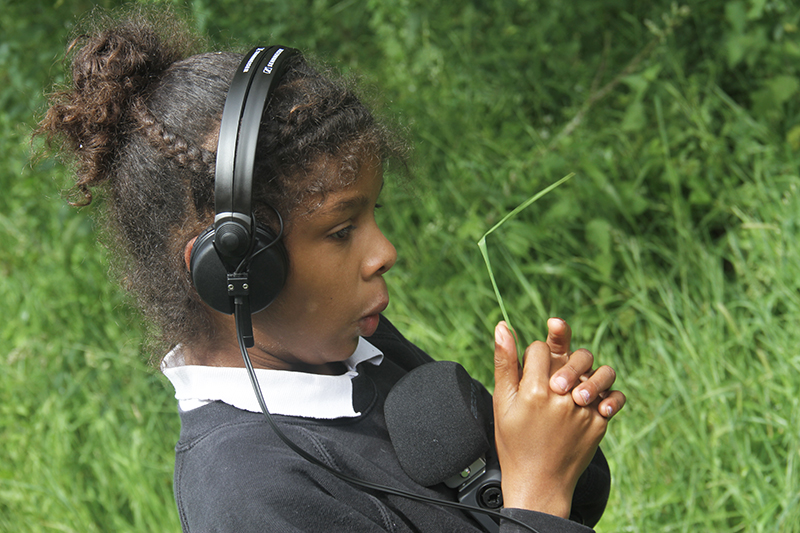