A Conversation Between Trees (2011) was a new artwork and part of a year long project by Active Ingredient, a group of artists led by Rachel Jacobs who work collaboratively to create interactive, playful interventions that merge art, science and technology to explore the world around us.

This conversation was between trees in Fineshade Wood, Northamptonshire, and the Mata Atlantica forest at the edge of Rio De Janeiro, Brazil, using environmental sensors connected to mobile phones placed in the trees to uncover the traces of a conversation between the trees and the results of our presence in the forests.

Each day, the story of the two forests was revealed through a set of clues, generated through a series of data readings, recording the temperature, humidity, carbon dioxide, decibel and light levels. This data was sent from the sensors in the trees and translated in real time as a visual interpretation of both forests.

The artists described the project as “an experience that takes the audience into an augmented forest, using a mobile phone as a lens to reveal that which we cannot see in the forest.” In Fineshade Wood, visitors were able to download an app or borrow pre-programmed mobile phones to take into the woods to reveal the invisible forces at play.

The visualisation would present the atmospheric conditions of nearby trees as a moving, abstracted form. Coloured tentacles would grow on screen using the woods as a palette, vibrating with nearby sounds, becoming more nebulous with changing levels of humidity.

A similar visualisation was projected at one end of the Little Barn at Fineshade, interpreting data from the ancient Ash in the forest. On the opposite wall was a projection of a visual interpretation of a tree from the rainforest in Brazil. The conversation between the two was played out across the barn as contrasts and similarities between the two environments were revealed. The humidity of the rain forest was a memorable difference, as was the occasional vibration caused by the sound of monkeys in the trees in Brazil, once reciprocated by our own inquisitive little monkey from a school visit to Fineshade Wood.

Over 100 pupils from Irthlingborough Nursery and Infant School visited the installation during a workshop exploring concepts of climate and nature by bringing together Art, Science and ICT. By becoming ‘human sensors’ the young people detected different aspects of the environment in the woods and looked at how the invisible forces around them could be represented using shapes, symbols and colours, resulting in a variety of semi-abstract felt maps which were exhibited alongside the installation by Active Ingredient.

Rachel’s PhD thesis ‘The Artists Footprint – Investigating the distinct contributions of artists engaging the public with climate data’, was enacted through a variety of age appropriate activities. Pupils stuck out their tongues to detect moisture levels. Temperature was gauged on a scale between “I went on holiday to Turkey once and it was hot!” to recent memories of snow. To measure carbon dioxide levels, pupils were able to utilise some of the state of the art technology the artists had brought with them.

Active Ingredient also presented a kinetic sculpture within the Little Barn, which slowly burned historical climate data into paper to create drawings which visually depicted how our climate has changed.

The processes and installations encouraged participants to empathise with the world around them and to take part in the conversation between trees themselves. It was also the beginning of a conversation between Fermynwoods Contemporary Art and another part of Rockingham Forest, which continues today with The Forest is the Museum – our current programme of artists in residence at Fineshade Wood. 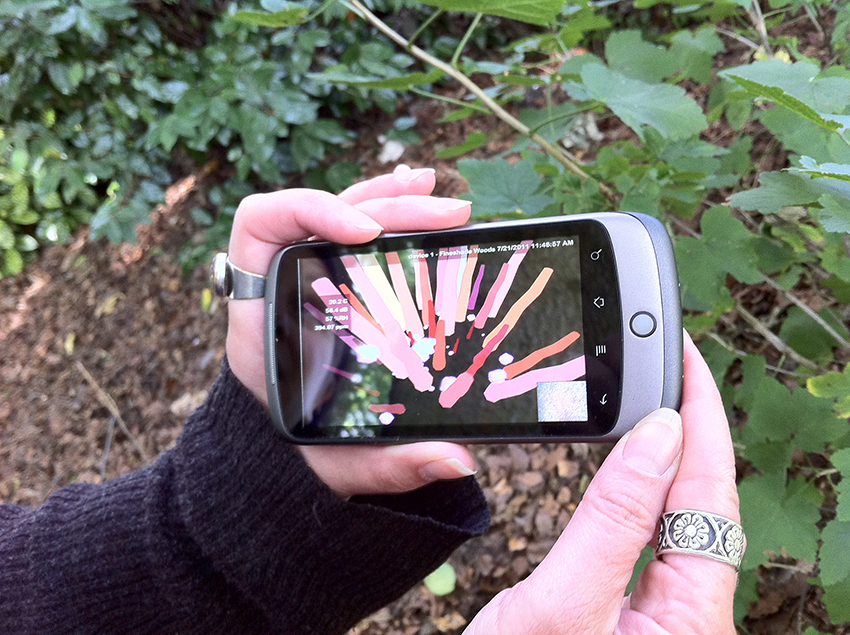 A Conversation Between Trees also toured to woodland spaces in Rufford Gallery and Country Park, plus the Centre for Contemporary Art and the Natural World.

The project was funded by Arts Council England and Nottinghamshire County Council. With thanks to the Rio Botanical Gardens, Bruno Rezende, the Mixed Reality lab (University of Nottingham), the Forestry Commission, Lizzie Haines and Bronac Ferran.