For this week’s Fermynwoods Friday post, sculptor Graham Keddie looks back in time to 2006, when Fermynwoods commissioned new sculptural work by Peter Randall-Page to be shown within the National Trust’s Lyveden New Bield, alongside an exhibition of new works on paper to be shown at Fermynwoods’ then gallery at the Water Tower.

Time to think, time on my hands. Take your time, take time out. Tell the time, time will tell, for a time.

In 2006, as a sculptor, time was very much on my mind all the time, the whole time, for a long time. I spent a lot of time searching through all the theories about it I could find in science and philosophy including: Newton’s “realist” concept of one true time; Einstein’s theory of general relativity; quantum gravity – a master clock; biological clocks; botanical clocks; Wheeler-De Whitt’s timelessness; Julian Barbour’s no-time. The more time I spent thinking about the word ‘time’, the more indefinite it seemed to become.

Then I walked into Fermynwoods Contemporary Art’s exhibition of Peter Randall-Page at Lyveden New Bield.

Lyveden New Bield is an unfinished Elizabethan summer house in the east of Northamptonshire, England, owned by the National Trust. The exact date it was built is unknown but can be estimated to circa 1604-05.

I have visited this historical architectural site before. What is left of the building is the shell which is almost like an empty stage set in a barren open landscape. For me, this combination of the landscape and the intimacy of the interior have always exuded an atmosphere of heritage and human strife from the past.

As I entered the site, its atmosphere made me feel as if I was somehow walking across periods of time. The site had external and internally installed works. Peter Randall-Page is renowned for his use of stone, although unusually for him the first piece I encountered was a cast bronze work called Bronze Dreaming of Stone. The title itself immediately set up a spiritual link to the other works.

Inside Lyveden New Bield itself were the installed works made from stone, a material that humans have worked on and made into sculpture since Palaeolithic times. As ancient as that seems to us however, the oldest element of the installation was ultimately the source of light; the sun, which reached down into the interior and seemed to kiss the stone works from above. The pieces embodied structures of plant-like fossils and seed-head forms. As I stood next to the pieces installed in the house, their giant size dwarfed human scale and pointed to the temporary nature of us and our built environment. They made me contemplate time before recorded time, a sense of pre-human existence, cycles of life, death, sedimentation and transference. They referenced layers of the earth’s crust beneath Lyveden New Bield and the stone from which the house itself was fashioned.

Having witnessed this, I was keen to spend more time visiting the Works on Paper exhibition at Fermynwoods Water Tower. These powerful drawings explored organic forms reminiscent of complicated multiplying forms of bacterial life seen under microscopes and the mystical designs of Celtic stone carvings. They were deeply atmospheric closeups of his mind, vision and planning at work. The drawings seemed to reference the threatening future dystopian imagery from the 1986 film Aliens directed by James Cameron and the drawings of H.R. Giger.

The sense of time, cycles and journey caused me to remember the Turner Prize winner from the previous autumn in 2005. This was Simon Starling and his work Shedboatshed, a shed transformed into a boat and sailed down the Rhine before being reconstructed back into a shed in the gallery. This interested me as a contrast to Randall-Page. Starling’s work certainly referenced time and cycles but more so the relationship between cultural structures and landscape.

I wanted to see if Peter Randall-Page’s work would in some way infiltrate my research and perhaps add something useful to my thinking. References to time, past, present and future, were in abundance. The sun, the earth’s crust, rocks 4 billion years old, plant fossils 450 million years old, stone sculpture since approximately 800,000 ago, bronze casting from 2500 BCE, Elizabethan architecture and politics. Not least, the date of the exhibitions. All these references were applied by Randall-Page.

Randall-Page’s sculptures are not about the objects around us, gods, politics, religion, cathartic introspection or formal art language. However, the sculptures because of their substance, scale and carving place the past in the present and the drawings almost serve as a warning to the future.

As I left the exhibitions I did not really feel that I was any closer to answering some of the original questions I arrived with. But, I did come away with a new question and a haunting sense of time. This did seem to point to something universally deeper. Possibly, the particular relationship between intangibility and sculpture was an example of timelessness, maybe something instinctively spiritual; perhaps the former is the latter. My time seemed well spent. 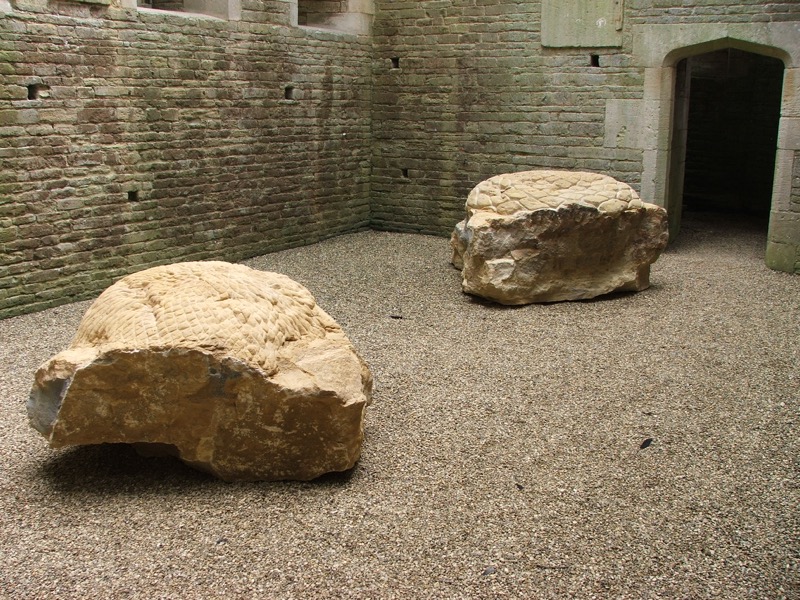