Beyond Seven Mountains (2016) was series of installations in Corby’s Hazel and Thoroughsale woods, including work by three artists: installations by Holly Slingsby, sound art by Robin Rimbaud aka Scanner, plus a large sculpture by Kenny Hunter.

Themes of mythology and storytelling were present throughout; the specific tales relating to Corby mingled with much older myths to transform the urban woodlands. Building on relationships established by Sophie Herxheimer in her project “The Listening Forest” and residency in Corby woods two years earlier, the Woodland Friends volunteers assisted here with installation, maintenance and took part in the Beyond Seven Mountains launch event.

The volunteers, like most of the other residents, were delighted and unconcerned about having a giant fibreglass swan by their boating lake, or a having a synthesised raven’s voice emanating from the between the trees, or having symbols of Hephaestus hanging from the branches. In fact their insight and advice informed the placement of the works in the woods.

One of the things that has stuck in my mind was the stories that came to light, particularly the tales that influenced Robin Rimbaud’s composition “Dark As A Raven” which evoked a science fiction soundtrack and was inspired by Corby’s coincidental links to outer space.

On July 18 1969, NASA gave the Apollo 11 crew a briefing on the latest news from back on Earth – including the result of a porridge-eating competition held in Corby. After reading the crew domestic news from the US, Bruce McCandless told Aldrin and Armstrong, “And in Corby, England, an Irishman, John Coyle has won the world’s porridge eating championship by consuming 23 bowls of instant oatmeal in a 10-minute time limit from a field of 35 other competitors. Over.” Legend has it that the Corby crater on Mars, took its name from the same story.

Kenny Hunter’s Black Swan also caused a stir with young residents casting seeds below the 8ft swan for it to eat, and squatting underneath exclaiming “I’m an egg!”. Black Swan later migrated to Barnwell Country Park, where it is on loan until October 2018, becoming a prominent fixture loved by staff and walkers.

From the outset we were warned that there would potentially be vandalism aimed at the artwork in Corby, due to the highly public nature of the setting. Each of the three works were targeted but were diligently repaired every time they suffered damage. On one occasion this involved asking Holly Slingsby to return to Corby with replacement plastic and metal symbols after parts of her installation were knocked down. Holly was very good humoured about this incident, joking on Twitter that Corby residents liked her sculpture so much that they had taken it home with them.

Some accusations by local press intended to paint Corby citizens as delinquents didn’t diminish our respect for the townspeople who reacted so positively to the project, responding with comments such as “It’s great … what we might see in a park in London” and “Art that enhances the area. I was staggered when I went past … my children were delighted.”

I was proud to contribute to the opening of Beyond Seven Mountains by delivering a drop-in workshop in the Community Cabin, building architecture-inspired models with card and clay. By capturing time-lapse photos of the construction along with spatial data and sound, I used this workshop as the basis for a new animation along with a sculpture and sound installation that was later exhibited at Two Queens gallery in Leicester.

This project was funded by Arts Council England. 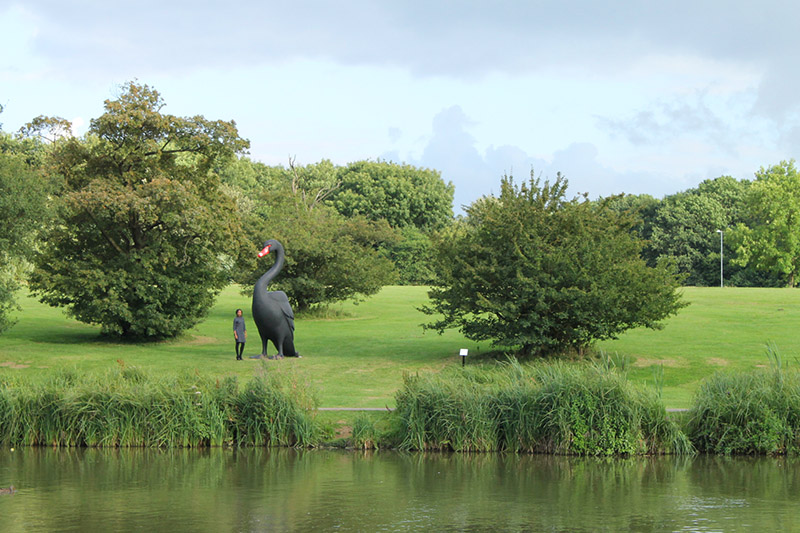