Touchstone was a site specific performance by Salamanda Tandem, taking place throughout Corby Cube in 2013, exploring the building through the movement, sound and touch of visually impaired performers Indra Slavena and Mickel Smithen.

Audience members were led on a tour of the building in a part-choreographed part-improvised piece, directed and narrated by Salamanda Tandem’s Isobel Jones, with live music by Duncan Chapman and musicians from Northamptonshire Music Education Hub broadcast to participants’ headphones.

As the procession led by Mickel moved slowly around the building, we learned that his white cane functioned like a cat’s whisker, feeding back extra sensory information about his surroundings. As the audience progressed through the building, weaving up the ramp past the library, towards Corby Borough Council’s One Stop Shop and Council Chamber, workers and members of the public would go about their business or attach themselves to the growing crowd of people being led through the space.

Threading herself through and around them, Indra’s fluid movements complemented Mickel’s careful journey, as she danced her way up the staircase in a striking orange dress. The pair had been in residence at Corby Cube for a number of months beforehand, familiarising themselves with the building on an intimate level.

As we arrived onto the first floor Indra invited us to “stop here and listen to ourselves”, informing us

“It’s always there, but it’s very quiet at first,
It gets louder and bigger if you listen,
This dance is within you all the time,
You can go with it,
It’s safe,
If you don’t know where to go you can follow,
You can follow others,
You can expand,
You can connect,
You can open,
If you struggle … follow us”

A beautiful inversion of fully sighted participants being led by the visually impaired, seeing more about ourselves and the building as a result.

Arriving outside the Council Chamber, the audience watched with their vision now partly obscured by the opacity of the glass wall and lace curtain, which rippled and accentuated Indra’s movements as she twirled and turned along the interior. As we were led by Mickel inside the Chamber, the dancers were reunited, expressing gestures and words about freedom – which could be interpreted as the freedom to move within the large and impressive space, or as something more fundamental than that.

Touchstone was part of Gesture – a series of artist residencies, video work, and live art performances curated by Caroline Wright and Yasmin Canvin, which highlighted the diverse range of activities taking place within Corby Cube; exploring relationships, social interactions and connections between intentional and subconscious gestures.

Virginie Litzler, one of our earlier Gesture artists in residence and audience member for Touchstone, commented, “For me the performance was held by the place: the Cube and the performers. The young lady had an incredible awareness of her relationship with her environment and brought a beautiful humbleness to the whole performance.”

The event culminated in a moving choreographed section where the Chamber’s electronic blinds slowly closed, with Indra holding on to the last remaining strands of light, before the audience were plunged into darkness. 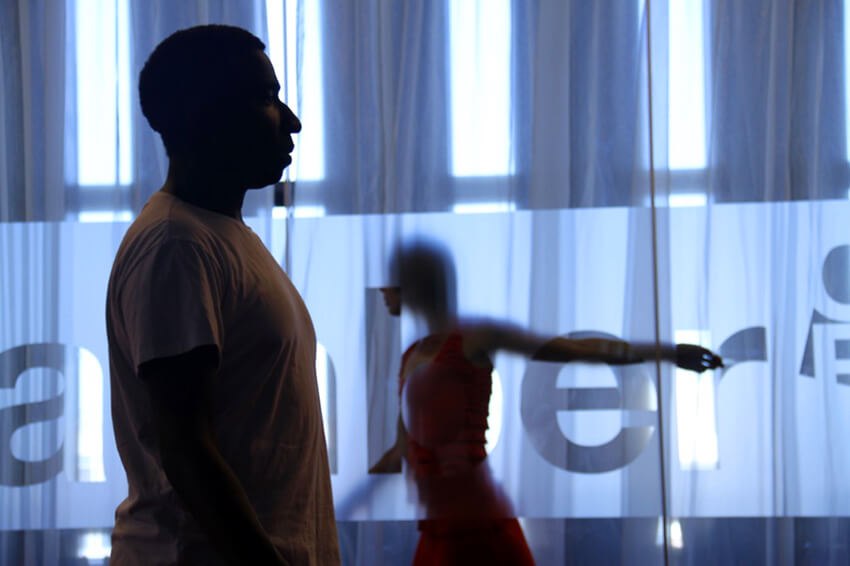 Touchstone was funded by Arts Council England, and supported by Corby Borough Council.