Alternative Approaches to Taxidermy was a participatory workshop led by David Blyth as part of our Wild Sharing series of events for the Outdoor Institute of Art. Described by David as an ideas-in-progress artwork, it was also my personal favourite moment of 2018.

David is an Aberdeenshire-based artist and Arts Hero whose practice is informed by a sustained engagement with the craft skills of taxidermy, drawing on narratives of local folklore, shamanism and cultural memory to propose alternative approaches to knowing the animal. As David puts it “I like animals, art and people, and try to make work that helps them get along better”.

David’s workshop was an open, discursive platform where the active ideas he was exploring would be shared and shaped through collaborative activity. This began with an introductory talk-cum-performance where participants learned about the habits and mythology of Scolopax Rusticola, the Eurasian Woodcock – setting up the taxidermy workshop which followed as so much more than the dissecting of 42 birds.

We learned that David’s relationship with the Woodcock began when one fell out of the sky – a bird in his hands. Two in fact. David suggested that when two connected things happen at the same time, we should pay strict attention, foretelling that a third is yet to come.

As was common throughout the talk, David would move seamlessly between superstition and rationalisation, each sounding equally plausible. Falls of Woodcock are most noticeable around the full moon in November, commonly known as the Woodcock Moon. The birds, which he named Judy and Sara, had been discovered on 6th November. Could it be they were disturbed by fireworks on the previous evening? Either way, David felt a certain responsibility had been placed in his hands.

Addressing the problem of the taxidermist who is unfamiliar with the animal he prepares, David began a period of getting to know Judy and Sara. This involved X-rays, the RSPB and joining the Game and Wildlife Conservation Trust’s Woodcock Watch. Logical research or an attempt to enter the shaman’s world through the eyes of a totem animal guide – could the birds be a sign or a spirit guide?

David shared his discoveries of the significance of the circle to the Woodcock. The species display circular “witch-like” migration patterns and males use circular evening flight paths known as roding to attract the attention of females. The X-rays revealed the Woodcock also has a small stone in its gizzard, which acts as a gastric mill. David’s getting to know the birds saw him create beautiful looped video footage of himself moving slowly in a roding fashion, and an exquisitely produced compass, which used the Woodcock’s long beak as the compass arms to draw circles – “a necromancy of sorts”. 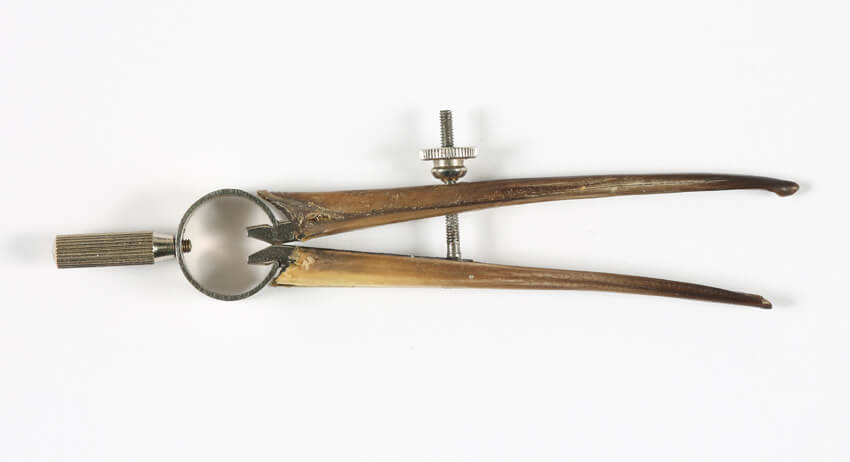 Image: On the Wing: a flight path for Scopolax Rusticola, 2014, David Blyth

As David’s talk went on we learned how since the Woodcock entered his life, it now seems to appear everywhere – even in a game bird edition of a round of Top Trumps with his human son, Robin. For his Christmas dinner that year, David enjoyed a Woodcock traditionally prepared by the butcher, head left on, legs trussed with the beak; leaving it to our imagination if he took part in the ritualised etiquette of using the beak to sup the cranial juices.

Exploring the world of game birds further, we learnt that the mystique of the Woodcock extends to the hunting domain. The veneration of the bird is marked by the presentation of enamel badges displaying their pin feathers to hunters who were witnessed shooting two Woodcock with the left and right barrels of a gun in one sweep.

After a departure into ancient Egyptian mythology, the discussion of the death of the birds led on to David’s personal trauma with the birds left in his care – the freezer had failed and the birds were accidentally defrosted. After feeling guilt at a Woodcock cremation and the premature loss of the birds from his life, a living bird arrived with a knock at his door in March 2017. Cue an incredibly moving photograph of the bird wrapped in a warm towel, David quoting Twin Peaks – “It’s happening again”.

At this point we were beginning to fall under David’s spell and any skepticism had flown out of the window. There was a circular relationship between David and the Woodcock, and one he wasn’t altogether comfortable with. Coinciding with his forty second birthday David was given 42 Woodcock heads. The ideas-in-progress artwork was a way to help David formulate the questions to the answers he was beginning to have. Could we end this haunting by fashioning the heads into arrows and shooting them towards that evening’s full moon, sending them back to whence they came?

The tactile workshop that followed may not have displayed the skillful taxidermy which David has acquired, but the participants all displayed an empathy for the bird. For David. As the completed arrows were fired ceremoniously towards the moon, spiralling into strange flight paths, David warned us “these arrows must never touch the ground”. Mine remains suspended on the Fermynwoods office wall like one of Hilda Ogden’s ducks.

Bruce Nauman pondered the end of Modernism with the statement “The True Artist Helps the World by Revealing Mystic Truths”, regarding it as both true and untrue at the same time. David has suggested that our cultural cues are no longer working and that by listening to nature we might be able to navigate a more successful path in the world.

I’m not sure I entirely believe in the significance of the synchronicity between David and the Woodcock, but if I suspend disbelief for long enough to pay attention, my mind is opened to new ways of exploring the world. During his research, David had the speckled Woodcock eggs read by a fortune teller.

“Taking these as a whole, you are looking at a reading that suggests leaving behind a recent past that has involved a period of personal transformation and hope, leading to a present with a greater idea of what you are doing with your life, and more intrinsic knowledge of your life’s plan, personal and professional. Uncertainty and stagnation has led into you being able to forge ahead fairly recently, with seemingly great progress in a short time when compared to the last few years. In choosing what you want, you have been able to accelerate rapidly toward it. Old pain and anger has now dissipated, allowing you to maintain a more centred and settled grounding, where life moves with you and around you, but no longer against you – you follow the flow of energy more easily than in the past. Ideas have manifested into realities.”

This post is the last in our popular Fermynwoods Friday series, looking back at some of our favourite projects over the past 20 years of Fermynwoods Contemporary Art.

The Outdoor Institute of Art is an alternative art school conceived by Yasmin Canvin, with a curriculum which will consist of discussions, skills and knowledge sharing events between artists, experts in relevant fields, the arts sector and members of the public.