I Want Nature (2009) was the culmination of a two-year residency with artist Jacques Nimki, which presented a rural wildflower meadow within the urban surroundings of Corby’s shopping centre.

Jacques had been investigating the wonderful array of weeds inhabiting our residency venue and the adjacent SSSI wildflower meadow in Fermyn Woods. With a practice inspired by weeds, regarding them as the ‘outsiders’ of the plant world that thrive in neglected and hidden places, Jacques saw a parallel with Corby.

Over a number of weeks the empty shop opposite the former taxi rank on Cooperation Street would be transformed into a meadow in the heart of the town centre. Windows were covered up and shoppers speculated about what was taking place inside. As a child I remember the shop as the place my Mum would buy my brother and I fluorescent socks. Later it would become a furniture store. Many guessed that this time it would be a Primark, although that would be some years later and in a different part of the town.

When the meadow was unveiled shoppers greeted it with both bemusement and excitement. Both vulnerable and threatening, the wildlife supported by the meadow grew and died during the month long installation. The artwork’s title, I Want Nature, became a rhetorical question.

The answer was a definite ‘yes’ during our Wild Photo and Wild Dancing events. For the former the public were invited into the meadow to have their photographs taken in the incongruous setting, at the disbelief of their friends on social media. For the latter the public were invited to dance on the meadow in a silent disco type scenario, with a suitable wild playlist.

For a few hours a gamboling lamb, on loan from a local farmer, inhabited the installation. For some this was an intervention too far, as we fielded complaints from members of the public in a nearby McDonald’s. Perhaps they didn’t want nature after all.

Like the most successful of our installations, many of the public were sorry to see it go once the installation was dismantled at the end of the month. Several still remember it to this day. The shop would go on to become a nightclub, and is currently the fabulous Paletto Lounge. The next time you are there enjoying a drink or a meal (gluten free and vegan options available), consider that where you are sitting might once have been home to a mischievous lamb or a papaver rhoeas – a wild poppy. Perhaps you can tell your children, “I remember when all this was fields”. 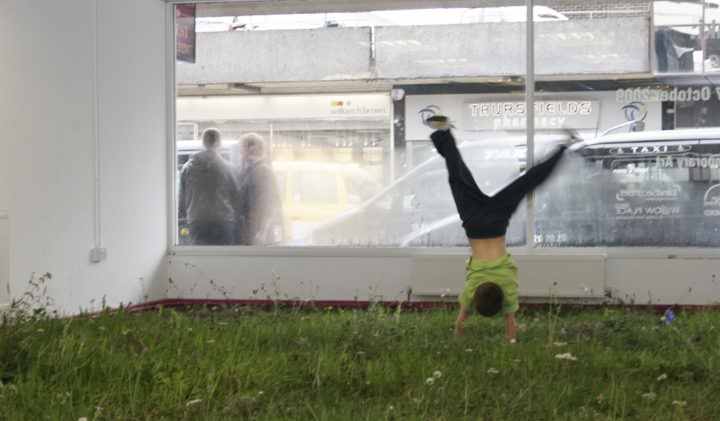