For the Arts Hero section of the Bronze Arts Award: Level 1 Award in the Arts qualification, young people need to research the work of an artist that inspires them. Corey from The CE Academy met and interviewed Scottish artist Roddy Buchanan during his residency with Fermynwoods, finding out more about his work and carrying out the following interview.

I went to a protestant school is Glasgow where everyone supported Rangers. My pal Ricky Barclay introduced me to Celtic in about primary 3. I started to follow them out of badness. My dad and brothers weren’t into football, so they didn’t really care and I got away with it. As I’ve grown older I’ve become more interested in Rangers, I know you’ll think this is crazy but I don’t hate Rangers, I think that’s because I have Rangers Supporters in my wider family and I see them follow their club. I follow Celtic but I still like Rangers. I hope you’re ok with that.

2. If so how many years have you supported them?

My dad is a good man. He was brought up in the Parkhead area of Glasgow. His grandfather and his brother were high up in the Masons and its safe to say that Celtic were never a team anyone in my family on either side had ever considered following before. For family honour my dad would never be seen dead in Celtic Park but he knew I liked football, so he took me to see Scotland v Sweden in Hampden Park on April 27th 1977. Kenny Dalglish a Celtic player and a Protestant was Captain at the time (Just as Scott Brown is now).

3. Have you ever been a part of the orange order or followed them?

I’ve always been interested in my identity. I feel strongly that the Orange Lodge, the Apprentice Boys and the Bands are blamed for everything that’s bad about the Central belt of Scotland. I think that’s rubbish. I think the bands are great. I know that particularly in working class areas they promote values I really buy into like inter-generational cooperation, commitment to one another, thinking and talking about politics and remembering history. I’ve developed good relationships with plenty of bandsmen. I speak up for this community as much as I can.

I also talk and make films with Republican bands. I value them also. In the same way as I can like Rangers and Celtic I can like Loyalists and Republicans.

Here’s a couple of films I hope you’ll enjoy. 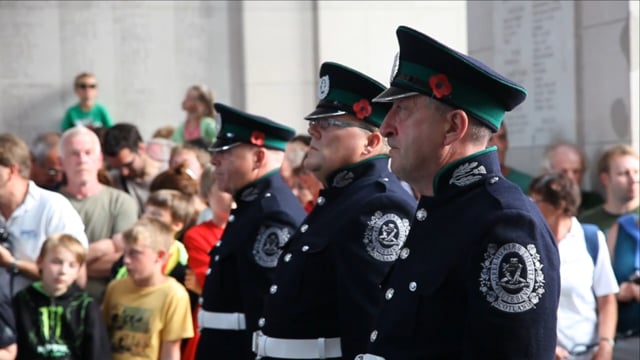 Every evening since 1928 the Last Post has been played under the Menin Gate Memorial in Ypres, Belgium. On 25/07/14 Greengairs Thistle Flute Band took part in this commemoration. 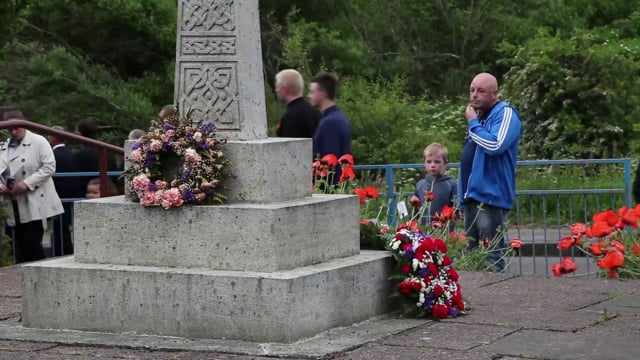 4. How many years have you worked with football as art?

Since 1988, so that’s nearly 30 years. I made an artwork that year to commemorate fans in Hampden Park showing Mrs Thatcher (the then Prime Minister) a red card. Trade Unionists had been handing these red cards out outside the ground. When she stood up everyone on the stadium used the cards to let her know what they thought of her.

5. Would you ever consider giving your job up?

Yes. Often. It’s a bit like being a professional footballer. A few people get really well paid and everyone thinks about them and their luxury lifestyle, the rest of the players just get by. It’s the same with artists.

6. What part of Scotland do you live?

I live in Glasgow.

7. Where do you show your artwork?

In the next few weeks I’ll be showing artworks in pubs in Corby. I’ve shown in lots of different places from really high class venues like the Tate in London or the Metropolitan Museum in New York to a Football Board Room in Huntly or a WW1 memorial chapel in Edinburgh.

8. What artists do you know that has the same profession with art and football like you?

A couple of pals of mine, Douglas Gordon and Philippe Parreno made a great film called: Zidane: A 21st Century Portrait.
Zidane is possibly the best footballer I ever saw play. Here’s a clip:

9. Have you ever met any famous football players?

Strangely enough John Greig the most famous Rangers player ever, lives near where I stay. I got my 3 sons to shake his hand. I also interviewed Roberto Carlos the old Real Madrid left back – which was a bit of a disaster – you can ask James about that. I met Claudio Caniggia – who won the World Cup with Argentina – in Cosco once and I was in an exhibition opened by Franz Beckenbauer so I spoke with him. I made a joke with Willie Miller the Scotland Captain and he didn’t laugh. I played football with Pat Nevin’s brother and had a good laugh with him on a flight back from France and finally I bought a bottle of champagne for John Carew the Valencia player when I was half-cut in a bar in Spain. These are the ones I remember this morning.

All the best,
Yours Aye
Roddy Buchanan

To read Roddy’s interviews with Celtic and Rangers fans in Corby, made during his residency with Fermynwoods, please visit: