Corby East Midlands International Pool opened in 2009 following a £19 million rebuild, designed by S&P Architects. To celebrate the new Olympic standard 50m pool, Fermynwoods commissioned artist Alex Julyan to design a series of floating structures to be assembled by local school children and floated on the pool during the opening celebrations.

As the new pool opening would coincide with Architecture Week, Alex developed a workshop which would draw inspiration from S&P’s innovative architectural design, the regeneration of Corby, as well as referencing an exhibition of photographs of architectural ruins that Fermynwoods was showing at the time.

Taking a line for a walk, if not yet for a swim, children folded, slotted and cut coloured paper to create their own architectural forms. Alex then combined these experiments to create a flat pack design from recycled plastic sheets, which would be assembled by students at local schools. 50 floating structures were assembled in all, to celebrate the length of the new Olympic standard pool.

The complex was opened to much fanfare in a ceremony that would see former competitive swimmer Bob Apel swim the first length in the new pool (having also been the last person to swim in the old Corby pool). The ante was then upped by Olympic swimmer and Strictly Come Dancing star Mark Foster, setting the fastest time for a 50m length as a goal to inspire future generations of local swimmers.

As the public began queuing round the block to use the new facility the opening ceremony shifted to another gear, usurping Foster’s impressive swim with an incredible presentation by Corby Steel Diving Club. Seemingly tiny children making increasingly higher and more elaborate dives, to gasps from the audience.

Later and more quietly in the opening proceedings, students from Corby Business Academy took their structures and floated them softly one by one on the now vacant water. As they slowly floated down the length of the pool, their shape mirroring the curve of the roof, a member of staff from the intelligently placed creche that overlooks the water commented tearfully how special this part of the ceremony was.

The Olympic motto of Citius, Altius, Fortius (Faster, Higher, Stronger) is a noble goal that can inspire us all. But sometimes it takes art to remind us there is also nobility in slower, quieter, softer. 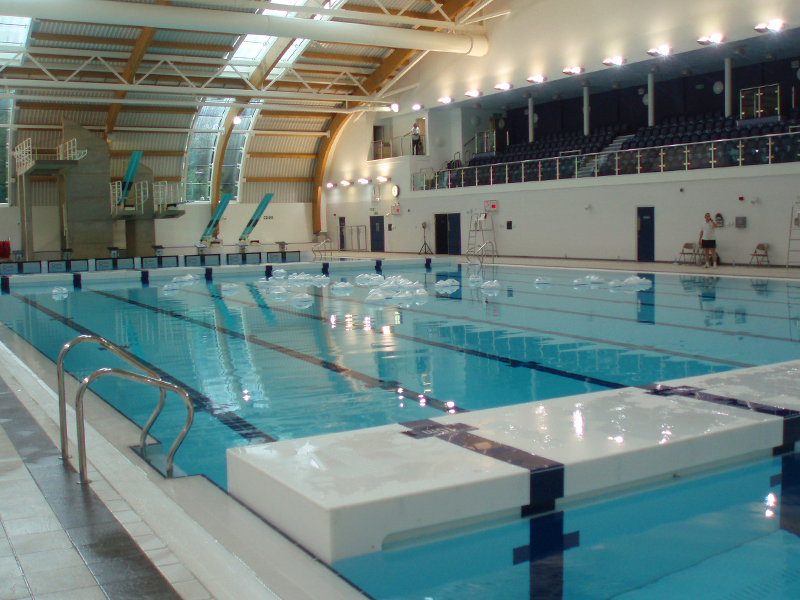 This commission was funded by Corby Borough Council.