In 2010 Fermynwoods commissioned Tree, a new work by Dutch artist Simon Heijdens. A full-scale image of a tree, drawn by a combination of intricate computer programming and the surrounding environmental conditions, projected onto the Corby Cube from dusk each evening.

Simon had previously shown work in Hong Kong, New York, Tokyo, Berlin, Milan and other cities around the world. Working in Corby was an obvious next step. Despite the appeal of the other locations, for many in Corby the town’s crown jewels are its woodland spaces. Hazel and Thoroughsale Woods remain the largest urban woodland in Europe. Remarkably they have survived the transition from village to New Town to Enterprise Zone to present day.

For others a landmark building was necessary to demonstrate pride and aspiration and to show the latest wave of regeneration was for real this time – anyone who remembers the promise of Wonder World will also remember the reality of wonder when. As the Corby Cube started to form, locals remarked, “It’s really happening now that the steel has gone up”.

Built on what would be known as the Parkland Gateway, the footprint of the Cube would actually result in the removal of some of the trees from the urban woodland. Excited by both the Hawkins Brown designed architecture and concerned about our increasing lack of connection with the natural environment, Simon was drawn to the building.

Launched to coincide with its grand opening, Simon created a “living digital organism” – a ghostly projection of a tree which would appear on the front of the Cube. With weather sensors placed on the roof of another Corby landmark, Grosvenor House (originally known as the Strathclyde Hotel), Tree would receive the weather data and grow and sway in the wind and rain. As visitors to the Cube would come and go, their movement would cause projected leaves to be shed onto the floor.

Capturing the excitement of the Cube’s arrival, an homage to the trees it replaced, and a premonition of the building’s proposed rooftop garden which has never come to pass, Tree remains one of our most fondly remembered installations. A delicate reminder of the tensions between regeneration and preservation, Tree was also an early example of what has come to be associated with Fermynwoods. Digital technology outdoors and temporary interventions which explore social and natural environments by making links between urban culture and the rural landscape. 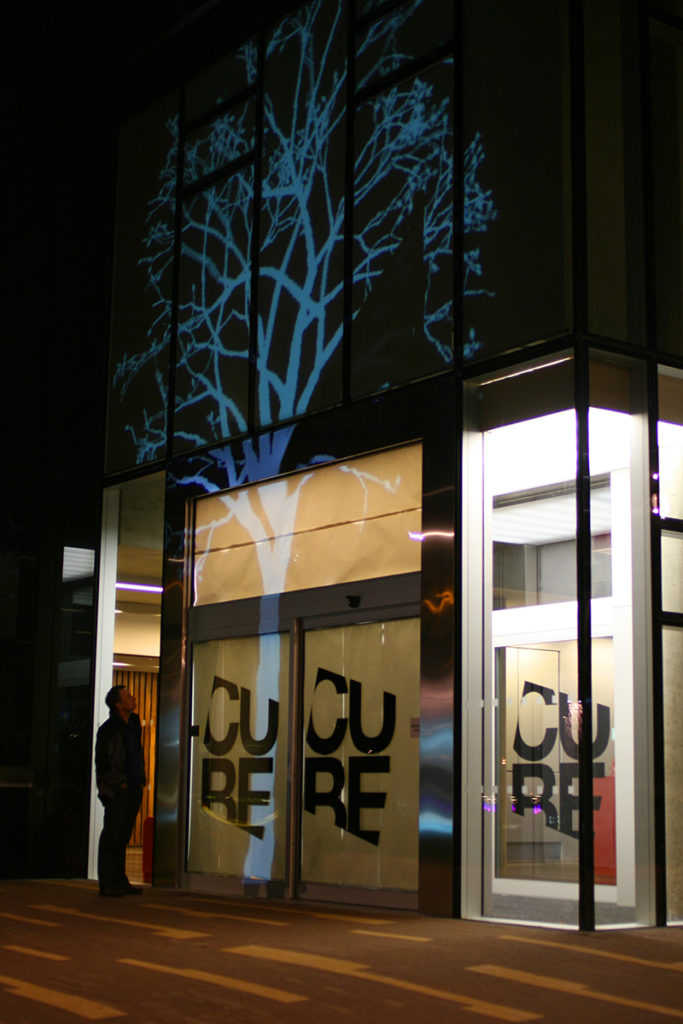