Stephen Turner’s Tree Rings (2008) was an exhibition that explored the passage of seasons and the alchemy of the natural world by collecting the marks and deposits made by nature. Julie Steventon reflects on the work and in particular how one piece made a mark on her.

In 2008, to promote the benefits of the Own Art scheme, I was approached by Fermynwoods to see if I would be interested in living with a piece of contemporary artwork for a month (with a view to owning it at the end).

Own Art aims to make buying art easy and affordable by letting you spread the cost of your purchase over 10 months with an interest free loan. The aim of the initiative I was invited to take part in was to try living with a piece of contemporary art and the benefits of doing so would advocate for the loan scheme.

Being lucky enough to be [Fermynwoods Director] James [Steventon]’s Mum I was already open to the idea of contemporary art. Giving up our dining table for about a month when he was drawing a cow’s skull for his GCSE final piece started it off. Initially I would comment on his work, “Could you just paint me a vase of flowers so I can understand it?” However after years spent reading and commenting on various essays and a wonderful dissertation on Kandinsky, something must have rubbed off. I can’t say I always understand what I see very much more but at least it has opened my eyes to a whole new world of art.

The piece I was loaned was by artist Stephen Turner, based on his Tree Rings exhibition at Fermynwoods, and given the title “Blackthorn berries: Kingswood”. Living on the doorstep of another Kingswood (Corby rather than Stour Valley) and spending many happy hours in the Local Nature Reserve, this seemed entirely appropriate and so we made room in our house for our picture for a month.

I was made to feel quite a celebrity as I endured a photoshoot and an interview by the local Evening Telegraph.

The work felt strange to begin with, but being various shades of brown and ochre it did at least go with our decor. Whilst we had it, it grew on me slowly. Initially it was like looking at clouds and trying to see things there. Being from the Tree Rings exhibition I interpreted it as the inside of a tree. However my final thought was that to me it was like an ultrasound scan of a foetus, which I never had. As my proudest achievement is being a mother of 3 this is probably why. I’m sure no one else looks at it in this way but I was very proud of owning it and of my children too. At the end of the month the piece was returned, leaving not only a space on the wall but a gap in my heart.

I was luckily gifted said piece by James for Christmas. Not entirely the idea of Own Art however the outcome was the same. I got my very own artwork which I would otherwise never have had – a great result. 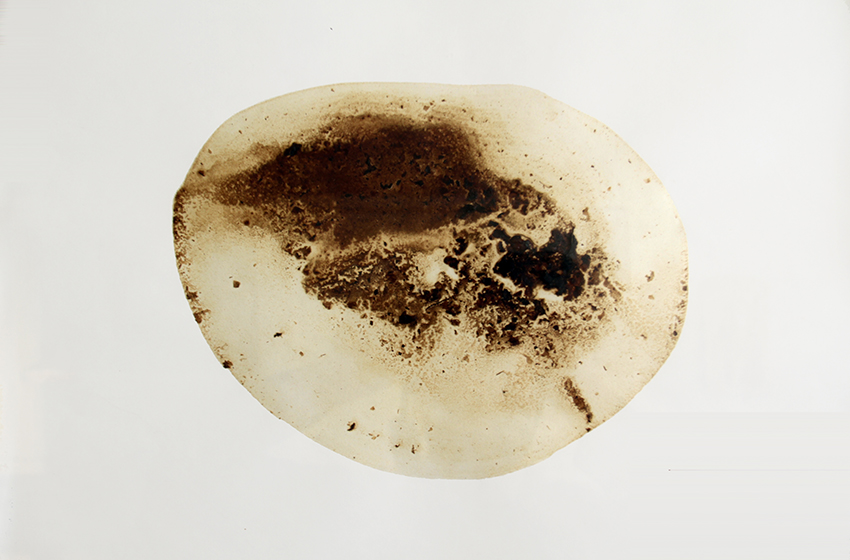