From March to September 2010 the rhythms of Fermyn Woods Country Park were made audible thanks to Andrew Stonyer‘s Audio Kinetic Solar Sculpture.

Since graduating from Northampton School of Art in the 1960’s, Andrew has exhibited around the world, describing his sculpture as “a search for patterns of actual and implied kinetic imagery that are hidden within the seemingly regular, and are always transcribed through the geometry of the circle and the square”.

Fermynwoods’ commission was an opportunity for Andrew to work in Northamptonshire once again, this time materialising as a sculpture which was suspended between a small group of Elder trees outside the country park’s Skylark Cafe.

Housed within the geometry of a circle, the cylindrical sculpture drew power from the sun – responding with movement and sound to its daily cycles. The rotation of the internal discs was proportional to changes in sunlight, revolving clockwise and faster as the sun got brighter, and anticlockwise and slower as it got duller. Andrew references historical precedents such as Aeolian (wind-powered) harps as inspiration. An earlier Audio Kinetic Solar Sculpture of his own would produce sounds as the internal mechanisms triggered by variations in sunlight moved plectrums across tuned strings.

Fermynwoods’ version advanced this idea to the movement of magnets, which would trigger short electronic snippets of sound. Parts of the sculpture facing east controlled the treble; parts facing west controlled the bass sequence of sounds. The rise and fall of the sun presented sonically, with the added variation of the fluctuations in sunlight through cloud cover or the leaves of the Elder trees. The sounds became shorter in length when the sun was bright and longer when it was dull, falling silent with dusk.

In 1978 Andrew was awarded the first PhD for studio-based research in Fine Art in the UK. This concerned the use of solar energy in the development of kinetic sculpture. For our workshop during West Haddon Primary School‘s Arts Week this knowledge was condensed into a story of pre-classical Greece where Andrew told of evidence of sun-powered, sound-producing sculptures. Pupils assembled their own small sculptures, using parts supplied by RS Components, which would reveal sounds when connected to the natural world.

On an expedition led by Andrew through Fermyn Woods, members of the public would use similar circuitry to test his notion of patterns hidden within the seemingly regular. The most musical response was when one young participant connected their sculpture up to a Marmite sandwich!

When not investigating their lunch, visitors to Fermyn Woods have more commonly evoked Ralph Vaughan Williams’ The Lark Ascending when listening to the Skylarks overhead. The sounds evoked by Andrew’s Audio Kinetic Solar Sculpture were altogether more abstract while at the same time more organic. 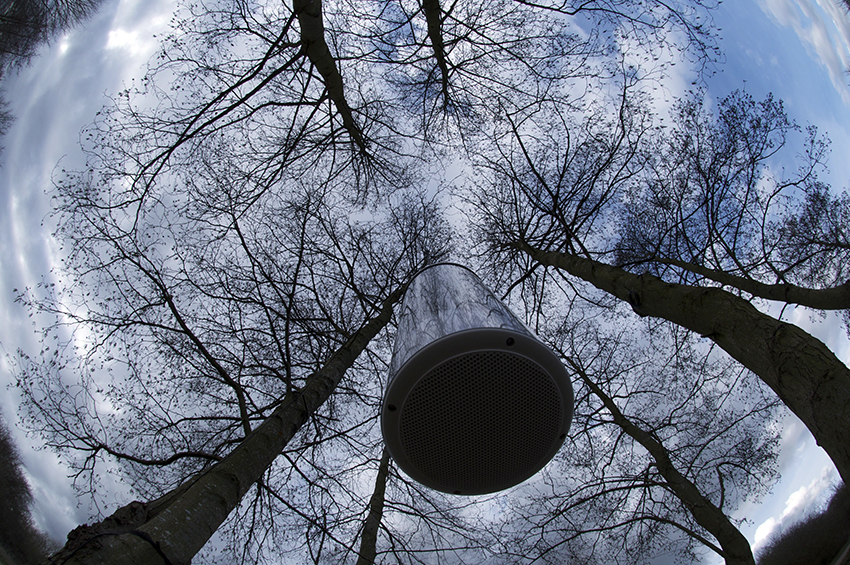