Alex Metcalf’s Tree Listening installation was a sound-based work that was enjoyed by thousands of visitors at Fermyn Woods Country Park in 2009. Alex’s installation has since been recreated in different locations with different trees around the world, including Kew Gardens; the Natural History Museum of Los Angeles; and recently featured in Judi Dench’s My Passion for Trees on BBC1.

Several years earlier, Alex had graduated as a Product Designer from the Royal College of Art. Amongst his designs was a Tree Listening Device, which allowed users to hear the hidden sounds of water moving from the roots towards the leaves, in whichever tree it was placed against; resembling a cross between state-of-the-art noise reduction technology and the trumpet belonging to Roald Dahl’s Big Friendly Giant. Like with the BFG, the real magic began when the trumpet was used. Alex realised this product wouldn’t easily be mass produced but wanted to share the special listening experience with as wide an audience as possible. The Tree Listening installation was the solution.

In spring 2009, headphones appeared hanging from the silver birch trees at the entrance to Fermyn Woods Country Park, resembling strange, low-hanging fruit. As a real test of the installation, children would instinctively put the headphones on, while adults would often seek permission first from the interpretation panel nearby.

Participants would hear the sound of water moving up the tree’s xylem tubes, crackling and popping as it mixed with air inside the tree. Children would describe the curious noises as like anything from a motorbike to “my grandad snoring”. BBC Radio Northampton featured the installation with a beautiful piece of radio that began with an extract of these noises, which to the uninitiated must have first sounded like the initial broadcast of H.G. Wells’ War of the Worlds.

Alex complemented the installation with a series of workshops for schools, where pupils learned to identify various species of tree by their leaves. After making scale models of xylem structures, groups explored the different sounds various shapes and species made when absorbing water. We later received a hand-written letter from a local head teacher stating, “There is really little in the National Curriculum that deals with the British flora and fauna, so a chance to see and hear things in a hands-on manner was really excellent.” This was 2009, before the curriculum further narrowed.

A local dog walker was a regular participant. However, on one occasion he challenged me that we were trying to trick him since the seasonal variation in sounds couldn’t possibly be heard live and Alex must therefore be diligently broadcasting recordings at different moments. I enquired whether he would regard a painting of a tree as a trick, or instead as a vehicle to think about trees. His reply quoted philosophers Deleuze and Guattari, questioning whether a tree or a rhizome was a more suitable metaphor for post modernism. A surprising and excellent conversation about both art and trees ensued.

Alex, meanwhile, invoked an altogether less academic reference. Dr Seuss’s Lorax – “I speak for the trees for the trees have no tongues.” The Tree Listening installation spoke for itself. 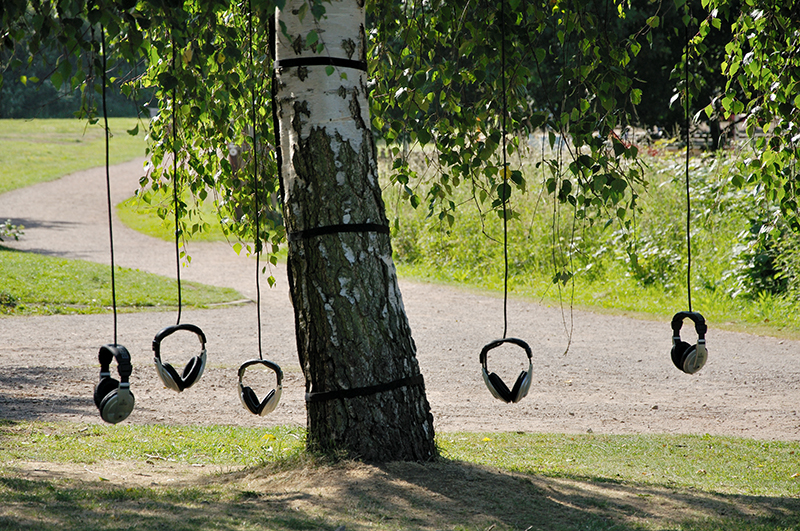 This project was supported by The Heritage Lottery Fund, The Forestry Commission, East Northants Council and Northamptonshire Community Foundation.