Nikki Pugh’s 2012 Traces; Walking and Drawing residency with Fermynwoods coincided with the Corby Walking Festival and explored the landscapes of Fermyn Woods, Corby and surrounding area through the lens of locative (GPS) technology.

Having previously made ‘digital cartographies’ or drawings of walks exploring and representing the effect of the environment on GPS signals, Nikki quickly set about recalibrating her homemade equipment to the rural environment of Sudborough Green Lodge, in contrast to earlier work in urban spaces such as Birmingham or New York. We were delighted to find that an old oak tree in Corby was ‘the same as Birmingham’ in terms of how it scattered the GPS signal.

Nikki arrived at Gretton Primary School, announcing she was an explorer, lost, and looking for help. With Nikki’s encouragement pupils set about creating their own map of the village, demonstrating how Nikki could find her way from the school to the sweet shop or the play area.

Before we set off to explore said sights, pupils unboxed several Garmin E-Trek devices, kindly supplied by Garmin in support of the residency. Pupils discovered for themselves that as they walked in a line, the E-Trek’s would draw similar lines on their screens.

After locating the pupils’ favourite parts of Gretton, including a tunnel in the pocket park that obscured the GPS signal, we returned to the classroom to upload the digital cartographies of our journey, students recognising the semi abstract lines as representing this place or that.

The enjoyment of the E-Treks progressed to delight when confronted with Nikki’s homemade devices – wires and components clearly visible without the modesty of a plastic case. Invited to assemble their own circuit boards, pupils discovered the increasingly high-pitched noises the circuits generated varied greatly if they hid them under a desk, in a draw, a book bag, or a plimsoll. This kinaesthetic approach led to the discovery that their devices were light sensitive.

From here it wasn’t much of a leap to one of the pupils suggesting that the drawing of lines created by Nikki’s GPS module surreptitiously placed on the windowsill the whole time was because the GPS satellite was becoming obscured by the school building, like when they put their circuits in a drawer. Another thought the drawing represented the excitement in the classroom, which was also true.

A terrific residency, and a school workshop, which like so much of Nikki’s work, demonstrated that art and science are not necessarily poles apart. Nikki was back in Gretton two days later, infiltrating a local ramblers group for more of the same. 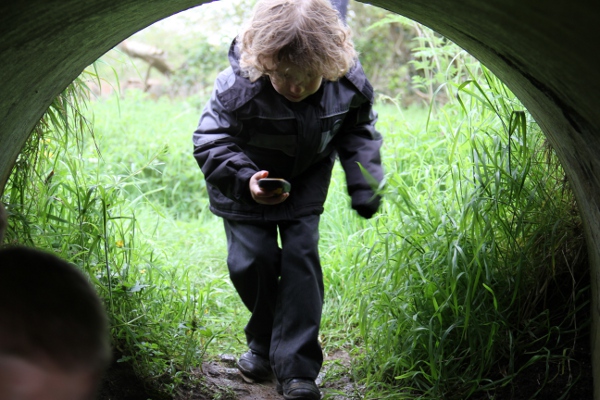