Drawn to Sculpture was a 2008 exhibition that explored the role of drawing prior to and during the process of making sculpture. Sculptor, and current trustee of Fermynwoods, Graham Keddie reflects on the exhibition and how he relates it to describing the creative process.

In 2008, I was researching two issues in my sculpture practice research. The first was linguistics, in particular the philosophy of numbers and reading the works of Ludwig Wittgenstein. The abstract concept of numbers fascinated me as an element in itself. But numbers in a practical context are also on the mind of most sculptors. Estimating space, scale, size, volume, quantity, kinetics, balance, proportion, engineering, fabrication and placement.

The second issue was testing, the development and expression of a concept to its realisation, working across art and science. I was very interested in Albert Einstein’s initial idea for E = mc2, described by him as a ‘thought experiment’, which in turn was tested, developed and finally expressed in mathematical model language.

As a sculptor I liked reading the physics surrounding E = mc2. For me it felt like an organic relationship between space, time, light and mass, elements which are part of the working methodology of most sculptors. Like artists’ work, Einstein’s thought experiment was also in consideration of the accepted knowledge of that period. It was a creative inspirational leap standing on the shoulders of others.

What also interested me was his legacy: an expanding universe. I was fascinated by the quantum mechanics proposal that the universe is composed of 4% of baryonic visible physical matter, 26% dark matter and 70% dark energy. I liked the idea that, so much of the universe was unknown and the term ‘dark’, so named not because these elements were colourless, but because science did not know what they were or are. It seemed like a metaphor for the artistic creative process.

Therefore, looking at sculptors’ drawings can be like viewing dark energy. The inner mind thinking, planning, exploring and expressing their thought experiments.

So, on the 24 April 2008, I felt drawn to the exhibition Drawn to Sculpture, curated by Michael Shaw. As I drove to Fermynwoods’ then Water Tower gallery, the weather was heavy, grey and overcast. It seemed to be a fitting metaphor for my research thinking at that moment. The exhibition presented seven very different working methodologies and visual languages, and offered an opportunity to peer into the artists’ personal investigations.

With Doug Cocker, there seemed to be a cathartic necessity to vent, grapple, wrestle and pin down internal visions. A contrast to this approach was the complex meticulous problem solving drawings of Lars Englund. These included calculations, estimates, illustrated planning and engineering, resulting in seemingly effortless sculptural realisations that subtly suggested visual puzzles.

Nigel Hall used paper to explore the preliminary drama of formal spatial dynamics; movement caught, trapped, frozen in time, motion and place, rather like repetitive chanting to focus his mind on the fabrication stage. Deborah Harty by comparison presented a drawing in the present. This was a drawing that invited one to walk into, experience, engage with, experientially feel, imagine and consider space, time and the universe as one might view a landscape.

Julia Mangold’s sculptures invoked the kind of mysticism epitomised in the monolith’s presence in Stanley Kubrick’s film, 2001: A Space Odyssey. The drawings offered an equivalent intimacy in two dimensions. These played with the Euclidean illusionary spatial plane, using simple geometric compositional proportions of black and white. They balanced ambiguity with one’s instinct to determine solid from space, real from fake, truth from lie.

Joanna Mowbray’s cerebral three dimensional perimeter drawings coolly cut, divided, bent and twisted planes of space, making invisible space elegantly tangible by exploring line as edge. Whereas Mowbray’s drawings divide what already existed, Michael Shaw brought surprise with organic doodling on paper researching a kind of internal sensuality. His traditional use of drawing media and the embossed relief works explored twisting, turning and dissolving weightless volumes, which for me, brought to mind the uncomfortable feeling one gets upon swallowing a large lozenge too early.

This exhibition philosophically reconnected me to my thoughts about working methodologies with metaphorical examples of what is very difficult to explain about the creative process. The drawing processes seemed to offer evidence of the Dark Matter and Dark Energy in the artistic process.

What is difficult to find and see in science and art is often explored through drawing in both specialisms. Why drawing? Because drawing offers a way to linguistically explore, develop and grapple with concepts not yet visual.

I rather like a quote from Atomic Physicist Dr Holger Müller.

“A physicist is like a drunk looking for his keys under a lamp post. He does not know where they are but it makes more sense to look in the light than in the dark”.

Would the physicist bump into the sculptor, also looking for his keys? Quite possibly, but the sculptor may himself be returning from searching in the dark. 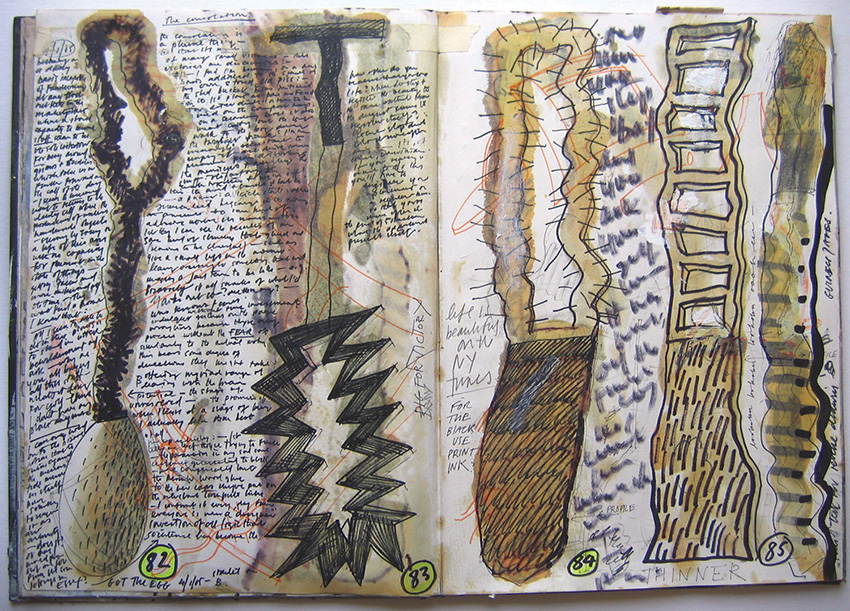 Drawn to Sculpture was funded by Arts Council England with support from Loughborough University.

To celebrate this weeks’ Fermynwoods Friday post we have a limited number of out of print Drawn to Sculpture catalogues available for just £12 each.