Figures In The Landscape was a 2015 workshop with students from The CE Academy. Led by one of our Associate Educators, Clare Abbatt, this workshop also sparked the imagination of Emma Davies, who provides this week’s Fermynwoods Friday post.

As an Education Coordinator on Fermynwoods’ Alternative Education provision since 2014, I have been witness to some truly special moments. One of these was sculptor Clare Abbatt working with our students on a sculptural project that was truly elemental.

Each week during the academic year, we work with students from The CE Academy to provide alternative education for young people permanently excluded from mainstream school. The artists we work with on this programme often approach us with an idea that mirrors or extends their own practice, or that can be seen as an experiment or research project where the students test a hypothesis. These experiments are not just ideas that are snatched haphazardly from the air, but are thought through, processed and selected based on a firm understanding of the educational and artistic needs of these students.

In the winter of 2015, Clare Abbatt was about to lead a workshop with our students. She suggested an idea that she billed as a mini Burning Man Festival. “Yes!” Was our immediate response, as long as there were some stringent safety checks.

We now know that Clare’s workshops tend to draw on both art history and the natural environment, with a special twist planned along the way. Among our educators, Clare has become affectionately known for her Reith Lecture style openings. This workshop began with Gilbert and George and Anthony Gormley’s respective turns on the Fourth Plinth, Chinese artist Liu Bolin, and – embarrassingly for me – a film of one of my drawing performances, the common theme being performance and figures in the landscape.

Clare then engaged the students in some warm-up activities, such as making miniature clay figures on armatures, posing as camouflaged living sculptures and creating brief performances on a plastic crate in homage to the Fourth Plinth.

And then to the main event.

Clare provided some basic life-size iron armatures, consisting of just a spine and base. After lots of careful measurements, the students sculpted arms and heads, before wrapping them in large, paper sheets until a distinct yet ethereal character emerged. The adults installed the figures in various locations in the surrounding fields. The simple process of connecting them to the earth upon which they stood brought the characters to life. The students nervously approached, not wanting to disturb the mystical creatures with which we we now shared our space. After summoning up courage, the students posed with them, keeping these inanimate and imposing figures company and engaging them in a silent conversation. For a short time, the figures became our friends.

Once we had all retreated to a safe distance, Clare set the Figures In The Landscape alight. For a very brief but exhilarating moment, the green field appeared to be alight with a series of glowing red flames. For the ten to fifteen minutes that this ritual lasted, the emotions experienced were vast. Students were left speechless, unable to verbalise the uniqueness of the event that they had both participated in and witnessed.

Sometimes, it is hard to capture in the written language the power of an experience. But I hope that these words can at least provide an essence of this unforgettable day. For a moment Clare transported these students to a land that was primal, where they were not of their own time and place, but of something more. 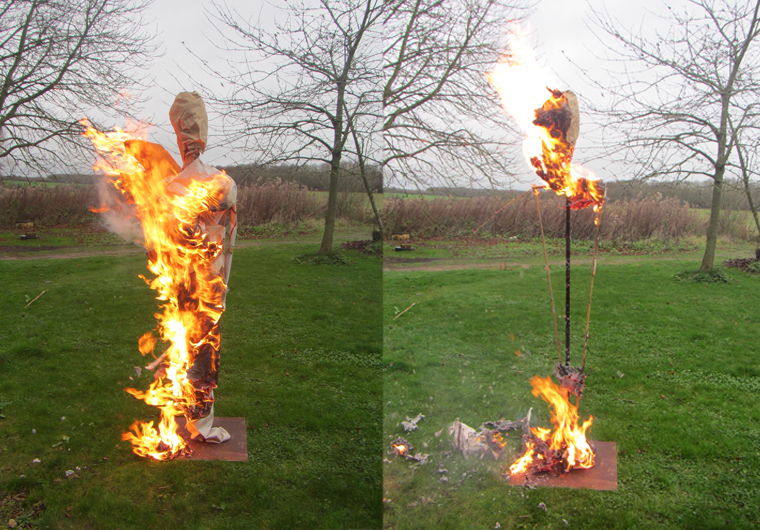 Image: Figures In The Landscape, Clare Abbatt and students from The CE Academy, 2015