Urban Divers was a project created by Japanese artist Tomoko Take in 2012, including a collaboration she initiated between sound artist, beatboxer and composer Jason Singh, leading Grime MCs Big Narstie and Diesle D-Power, blogger and founder of Grime Report TV Lordie Lord, plus students from The CE Academy who had been excluded from mainstream education.

During her residency with Fermynwoods, and as part of her ongoing Homeless Home project, Tomoko was exploring the differences between the Dutch words for home. One word describes a literal, physical home and the other relates to being spiritually homeless. Tomoko describes her journey as “Always looking for where home is. Not a room over my head or a country, but where I can be treated as a person without a label.”

During her time with us, Tomoko’s physical home was at Sudborough Green Lodge, where she encountered Jason Singh delivering a beatboxing workshop with students from The CE Academy. Jason himself was questioning the idea of home, referring to himself as a nomad due to his busy touring schedule. The students all had what amounted to physical homes, but many of the problems that led to their exclusion stemmed for their lack of spiritual homes.

Tomoko, describing herself as coming from the ghetto in Osaka, immediately empathised with the students, proposing a project which made an unlikely connection to the UK Grime scene – where MCs confront and speak about their everyday lives and the issues they face through their lyrics.

Tomoko explained that she would invite the Grime artists from East London to Corby to collaborate with the students and Jason to create, sample and record their own music, drawing out stories, feelings and emotions around the idea of home. The boys kept asking me during the first day, “Are the MCs really coming?”

When the students’ musical heroes did arrive the next day, the boys were starstruck as the MCs led them through a series of lyric-writing activities. It immediately became clear that a lack of support from a spiritual home was intertwined with issues of self-belief. If home is where someone “can be treated as a person without a label”, what does the lack of one do to a person? Big Narstie confronted the problem of their shyness by demonstrating what a difference confidence makes. Standing out in the centre of Corby, he lifted his shirt, revealing his belly, and yelled “Confidence!” Lending further importance to lifting their voices, he told them that they already had “a million people who know where you’re coming from” with their lyrics about past mistakes and future aspirations. They then rapped their own stories alongside Big Narstie and D-Power, with Jason providing beats.

Barbara Rawcliffe, a teacher from The CE Academy who was on hand to support, commented:

“[The MCs] understood [the students’] school difficulties but didn’t play on that. They turned it around to the need to have the confidence to go out there and deal with whatever comes. School is where you can become confident. To see those three role models standing there saying that was a wonderful experience.”

One student announced his spiritual home was a nearby village that had carried his family name for hundreds of years. His ambition was to move there to carry on the family tradition. On the final day of the project, the students brought Tomoko and Jason to said village to share this particular vision of home.

As Tomoko and Jason talked, the boys walked ahead, wrapped in their hoodies. A resident of the small village decided they looked out of place and confronted them. With a newfound belief in himself, the student made his voice heard – this was his family’s village and he was there working on a project with a filmmaker and a beatboxer. 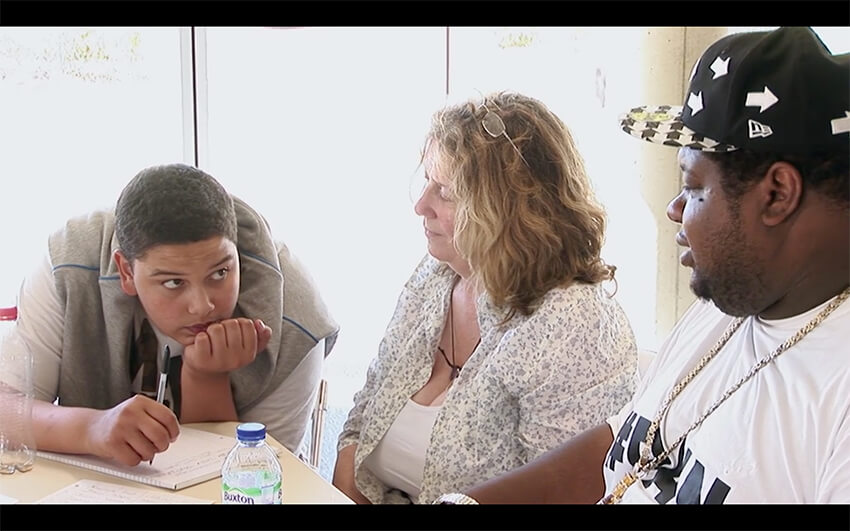 Tomoko’s residency with Fermynwoods Contemporary Art was part of Radar’s AfterGold programme, a series of commissions and interventions at Loughborough University with Japanese artists. The lyric writing workshops took place at the Corby Cube, with a final workshop led by Jason Singh at Sudborough Green Lodge.