Art + Satellites was an early Free Exchange discussion in 2013, led by artist Nikki Pugh and Garmin‘s Laura Tomei, discussing the creative uses and implementations of locative technology, exploring how we can use Global Positioning Systems (GPS) for demonstrating more than just our position or drawing a line where we have been.

Our Free Exchange events have evolved over the years to the current live streamed format taking place in changing venues, as part of our Outdoor Institute of Art. However, Art + Satellites remains one of my favourite discussions, both for its content, and as an early example of how these discussions demonstrate the alternative perspectives from which artists and non-arts speakers see the world – and the value of bringing them together.

Laura, EMEA Cartography and Content Product Manager for Garmin Europe Ltd, introduced Garmin as the world’s leading mobile navigation device company and GPS device manufacturer. Nikki, an artist located somewhere at the intersection of people, place, playfulness and technology, also introduced herself as a GPS device manufacturer, just on a slightly different scale, sharing her own personally soldered devices that she had used to create beautiful digital drawings.

Nikki described her artistic practice as viewing the world as an explorer or an investigator, to which Laura described Garmin’s intention as wanting to make different kinds of navigation easier – both manipulating cartography to achieve their goals.

From Laura we learned that when raw data is received from GPS satellites, unexpected fluctuations in the data (known as spikes) can occur through interference from buildings, the atmosphere, and the built in errors inherent in any electronics. Garmin use algorithms to ‘flatten’ the spikes to “average out the error”, providing a more useful response. Nikki explained her interest in revealing these errors, however she would only allow those which passed her aesthetic filter. Both shared similar experiences of spikes occurring in both urban and rural areas due to interference from buildings, trees and weather.

Nikki described some of her work currently in progress, including tests for a wax object containing a GPS device. The object would (and I can testify later, did) vibrate when orientated in the direction of a pre-determined site of desire. In addition to offering the user an extra layer of haptic experience, the object referenced bees’ ‘waggle dances’. Bees have an amazing GPS system for discovering food. By performing the dance bees communicate their data to other members of the colony, where the length of the dance is thought to encode distance.

Laura complemented this by discussing other ways that Garmin explore and express data. Sonar is used to map underwater surfaces. Increasingly this is now being used to map roads and 3D shapes such as buildings. The result is “something like a movie”. Nikki remarked that the conventions of cartography tend to be from a birds eye view. Laura suggested that this is becoming less so, with perspectives such as Google’s Street View. Laura explained when Garmin map golf courses they rely on satellite images. However if no images are available they walk the course, twice [in case they get a hole in one?].

We learned that there are 32 satellites in orbit, with at least 4 needed to determine position (‘to lock’). There are a variety of different global positioning systems available, including the US system that offers worldwide coverage; GLONASS, the Russian alternative; and Galileo, a system being developed by the EU at the time. Nikki felt the concept of language could be interrogated to offer an extra layer of experience, and the realisation that perhaps what she was doing was also searching for alternative languages of navigation.

Laura explained that Garmin’s output is determined by a need to stay in business, so factors such as reproducibility, practicality, scalability and the individual user’s experience are all important. Garmin undertake market research to determine upcoming trends such as colour and shape and typically have an idea for a new product 1-3 years in advance. However, in that time things can often change. By contrast, Nikki’s primary driver is her curiosity as an explorer. By nature this affords her the opportunity to be more flexible, questioning and responsive – and suggests another value in businesses working with artists.

There was some discussion about the potential for more sinister uses of GPS such as tracking devices and the possibility of living in a world controlled by algorithms, something five years later we are both more aware of and oblivious to. Laura described this as “the matrix”, but in closing added, “well, the matrix is a map”. 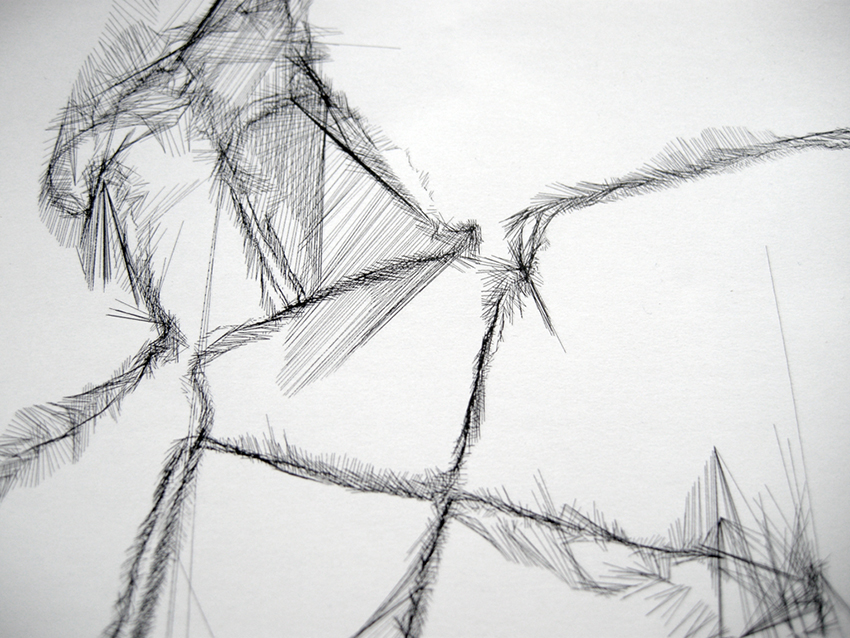