Alternative Site Survey was a 2013 live art performance by Holly Rumble, using electromagnetic pick-up coils to detect and amplify the invisible electrical circuits embedded in the walls, floors and other spaces around Corby Cube.

Alternative Site Survey was part of Gesture – a series of artist residencies, video work, and live art performances which highlighted the diverse range of activities taking place within the building; exploring relationships, social interactions and connections between intentional and subconscious gestures.

Fermynwoods’ interest in the building was the unique physical and social environment, which houses Corby Borough Council Offices, Chamber and Registry Office, alongside the Library and The Core theatre and performance spaces.

As a Corby resident I was also interested in the architecture of the building. Its striking design appeals to me, and it is certainly a landmark for the town. For many of the previous generation of Corby residents the Cube’s industrial appearance of concrete and steel is too close to their memories of steelworking to suit a recreational space. Others have gone as far as suggesting instances of sick building syndrome.

Holly’s performance subtly tested some of these associations, as she gently moved around the building resembling a contemporary dancer, occasionally pausing to survey the location. Lighting strips, automatic doors, computer screens, and PDQ machines all emit different electromagnetic fields, which were picked up by the coils attached to her hands as she explored the nooks and crannies of the building. With an amplifier attached to her belt, the sounds discovered and generated by invisible forces were broadcast as she moved throughout the building.

Rather than rely on the apparent nominative determinism of the artist’s surname, during the performance Holly aimed to describe these sonic properties using British Sign Language. The movements of her hands when signing also altered the sounds, as the sensors moved over fluctuating strengths of electrical signal. The sign language spelling of “buzz” is a much more jerky gesture than “hum”, which has smoother movements, correlating to the sound itself. The differences between the sounds and words also became apparent to audience members unfamiliar with British Sign Language.

By the end of the performance Holly had created a new floor plan for the Cube. Instead of depicting the physical environment and structural surroundings, the plan revealed the hidden electrical pathways and opened the door to other associations, going beyond words but generating new conversations. With their interest piqued, members of the public were also invited to listen to the recorded sounds and play with the equipment, locating more electrical fields and revealing more hidden activity within the building. 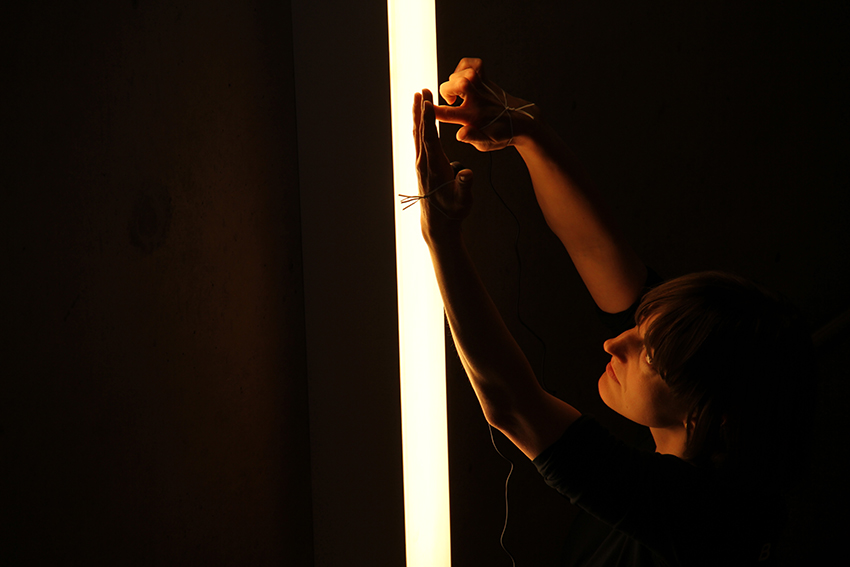