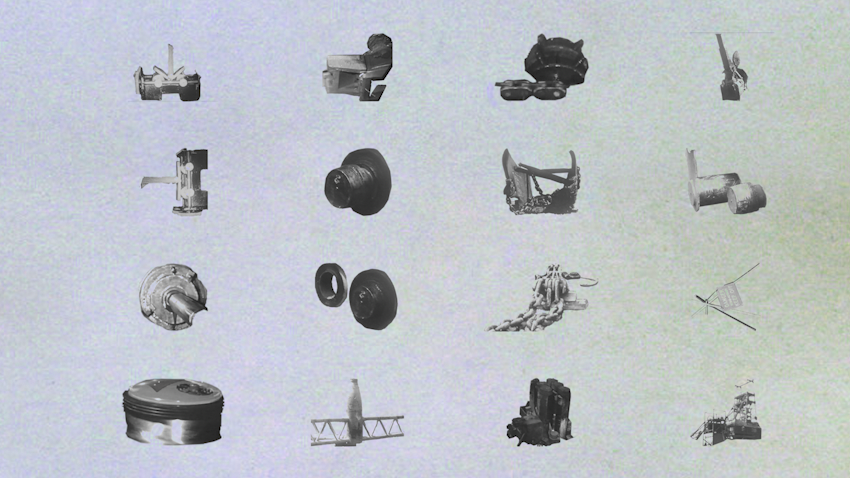 But these quiet scenes are eerily populated with objects out of context, made from the cogs, wheels, steel tubes, jibs and other industrial and agricultural ephemera cut from one scene and composited onto the countryside.

This obsolete, silent machinery is placed in fields in outsized proportions, making curious monuments in the manner of Paul Nash’s Equivalents for the Megaliths, reminiscent of the antifascist Spomeniks built in the former Yugoslavia.

Divorced from their previous function, Sapphire’s monoliths imprint their shapes on the landscape; mysterious shadow structures of memories, leftovers of forgotten worlds. Heavy industry seems as alien to most of us now as ploughing with a horse.

We see not just the film textures of the original archive, but later VHS artefacts and DVD glitches where the collection has been digitised to the current pixels displayed here.

In this way the film traverses layers of time. Everything in this world is fragile and unstable – constantly buried, dug up. The land remodelled and remoulded, on the brink of collapse.

The faster paced scenes are built using dynamic moving sequences of industrial processes, angular cranes creating shifting negative space compositions. Everything is off kilter and unstable. The images are disintegrated, dissolved, buried and evaporate into plumes of smoke. The film cuts and folds time on itself, making a prism through which to see the past in a new way. It explores things that are lost and unremembered but still leave their imprint in the topography of the land, in the composition of the soil and the movements of populations that make up, as the original Double Harvest film describes, “the never ending jigsaw of life”.