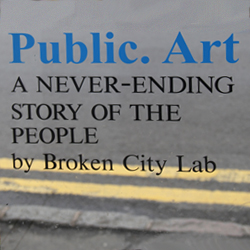 A Never Ending Story Of The People (Thrapston) was an artwork by Broken City Lab in 2013, which was part of our Public.Art series, an LED sign visible 24 hours a day in the window at 33 High Street, Thrapston. The focus on the work was not on the town or city as an idea, but on the people who live there.